On Monday mornings, I consider my walk with God via His Son Jesus Christ, having finished Sunday morning worship and a weekend of family time.  This week's post is the lesson I will be presenting this Wednesday evening to my AWANA Journey (high schoolers) group.  It is based on AWANA's Faith on Trial curriculum. 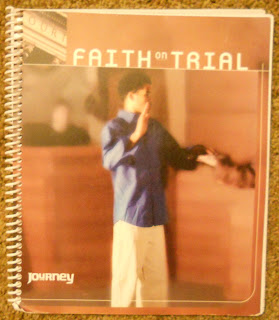 
This statement, from the Scientists Confront Creationism, makes two assertions.


This statement comes up a lot in evolution v creation arguments, for example in the book by Richard Dawkins The Greatest Show on Earth: The Evidence for Evolution 2. Each of these assertions can be refuted, and we will do so.


First, the claim that the facts are not disputed by any serious scientific worker. That is so easy to disprove, that it almost seems as if it is a waste of time to do so. But if someone is going to make this claim, we will go ahead and disprove it.


How? By presenting examples of a serious scientific workers that are officially on the record as disputing evolution.

Jonathan received his Bachelors of Science with honors in Chemistry and his Ph.D. In Physical Chemistry from Victoria University of Wellington, New Zealand. He has co-authored papers in mainstream (non-Christian) scientific journals including one on high-temperature superconductors published in Nature when we was 22 years old...
His first book Refuting Evolution (1999, 2008) was written to counter a teachers guidebook by the National Academy of Sciences (USA), Teaching about Evolution and the Nature of Science. He later wrote Refuting Evolution 2 (2002, 2010) and the highly acclaimed Refuting Compromise (2004, 2010), both as responses to attacks on the Biblical view of history...

Jonathan is also an accomplished chess player and is a former New Zealand Chess Champion.3

Example 2: Dr. Nancy M. Darrall, Botanist. According to the Answers in Genesis website,

Example 3: David Coppedge. According to the Associated Press,

A computer specialist at NASA’s Jet Propulsion Laboratory is going to court over allegations that he was wrongfully terminated because of his belief in intelligent design. Opening statements in the lawsuit were a little more than a week ago in Los Angeles Superior Court. Coppedge worked as a team lead on the Cassini mission (exploring Saturn and its many moons). He claims he was discriminated against because he engaged his co-workers about intelligent design and handed out DVDs on the idea while at work. He was terminated last year after 15 years on the mission. His responsibilities mainly were to maintain the computer networks and troubleshoot technical problems for the mission.
According to the Associated Press, Coppedge received a written warning because co-workers complained of harassment. Also mentioned are conflicts with others, including his request to rename the annual holiday party a Christmas party.
The National Center for Science Education, which rejects intelligent design as thinly veiled creationism, is also watching the case and has posted all the legal filings on its website.5

So here are three of many modern day examples of people who take their work seriously. Remember that we are not evaluating either their conclusions, who they work for, or their personalities. We are only asking the question, “Are there otherwise reasonably intelligent people who work real jobs in science who happen to believe in creation, or at least intelligent design, or at least something other than evolution?"

So, the question comes, “If the assertion that no serious scientists are creationists can so easily be disproved, why make the assertion in the first place?” In my opinion, one way to answer that question may be found when we analyze two other statements together:
What's Paul saying here? As we know, there are two types of people in this world: believers in Jesus (as taught in the Bible) and non-believers. Not only is the difference between the two of eternal significance, heaven and hell, the difference is also infinite in this world and how we/they view the world. Atheists and evolutionists, especially angry atheist evolutionists, have a worldview infinitely different than Biblical Christians. And the thing to remember is that they truly, honestly, sincerely think they are absolutely, positively, right. Just as Biblical Christians who hold to the creation worldview also truly, honestly, sincerely think they are absolutely, positively, right.
Therefore, we would expect a non – creationist to believe that “the facts of evolution are clear.” Are the facts of evolution clear? Sure they are, to evolutionists. According to Paul above, nonbelievers seek signs and wisdom. The proclamation of Jesus, who he is, and what he did, does not fit their criteria. Even if it did fit, they are spiritually blinded and wouldn't see it anyway.
We would also expect them also to be absolutely convinced that “the facts are not disputed by any serious scientific worker.” I haven't had time to research this through, so this is just an “I'm wondering” on my part, and I'm wondering if the logic goes like this:
Can anyone see the logical fallacy here?


Dr. Georgia Purdom, molecular geneticist, author, and speaker agrees (who would be Example 4):

A few months ago I received a flyer for a homeschool science curriculum called Real Science-4-Kids. The flyer stated that the curriculum “is 'worldview-friendly science...without the spin.” I wondered exactly what that meant, so I went tot he curriculum website and read the following:

In order for science to be “scientific” it must not commit itself to any one worldview, ideology, philosophical or religious perspective. Science and scientists must be free to follow the evidence where ever [sic] it leads. Anything short of this is not real science.

I remember thinking something very similar twelve years ago when I first started reading the origins issue. The evidence would lead me to the truth, I thought. I just needed to follow.
But what I discovered instead was that while science itself may be an objective exercise, scientists are not objective – especially in the area of historical science (evolution and creation). Presuppositions and biases play a definitive role in determining how scientists interpret evidence and the conclusions they draw about the past.6


In the Faith on Trial's Lesson 9 Conclusion (The curriculum we are using on Wednesday nights), it states that “We must remember that science is not our enemy.” In that same spirit, let's remember that those whom we come in contact with who happen to be atheists, evolutionists, even angry ones, are not the enemy, but instead the opportunity. They oppose God and how his creation came to be, but they cannot help it!
Endnotes:

2 I began reading this book for research last year, but stopped about halfway because I couldn’t stand it anymore.

7A non-believer would say this is a circular argument. While it may or may not be, two things. The opposite is true: Evolutionist conclusions are drawn by evolutionists. Also, this argument is OK because, as we've been learning all year, Scripture supports this argument.
Posted by Unknown