When grilling chicken and brats on Independence Day this past week, I found myself nostalgic for July 4ths of once upon a time.  Consider it one way to cope with the disruptive heat wave we've been having.  Life is good, but disrupted somewhat.  So I've been thinking...

My grandparents lived in a home they built themselves in the 1950s in a pleasant neighborhood in Hobart, Indiana.  In the 1970s a lot of my extended family (aunts & uncles, a great aunt, a great grandmother) also lived in town, so we would all gather for this and other major holidays.  We could walk to the 4th of July parade from their house, so we'd all meet there and walk to the parade together.  My brother and I, an later my cousins, discovered parade candy-gathering.  We also learned to stand when the color guards marched by.


Later, antique cars would drive past.  "Did they have cars like that when you were a girl?" I ask my great grandmother. 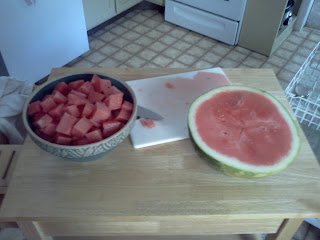 After the parade, back to the hose, my grandfather would grill hamburgers and hot dogs on a huge Weber type charcoal grill (it looked very big and hot to me).  From what I can remember, he seemed to be at the grill continually during the afternoon.  We'd finish lunch, and he would keep offering more, a seemingly endless supply through dinner.

Fireworks would start just before 9pm becuase Northwest Indiana is in Central Time.  Indianapolis is in Eastern Time so they are an hour later.  And have fireworks always been only 20 to 25 minutes long?  They seemed to come and go quickly this year.

Now I'm all grown up and it is my turn to be the griller.  Our gas grill is useless so I'm back to charcoal, and I like it much better.  I don't have a big Weber yet, so I used our "Smokey Joe," maybe 18 inches in diameter, to feed my family (we got it for camping).  Darling Bride's parents and grandparents joined us for Independence Day dinner this year.  We used the oven to finish off the chicken, but that's OK.  They all went home before fireworks because it was getting late.  We got to the fireworks just in time.

The point of today's story is that all's well that ends well despite a very unusual Independence Day this year, part of an unusual summer.  Traditions change just like generations and seasons do.

Back to work on Thursday, a co-worker remarked about what a strange day July 4th was this year.  Of course I am continually thankful for the freedoms that we have, which includes a day off which provides us the extra time for extended family to share a meal and some companionship.

I wonder what my kids will remember?  Hope it is good.

Aside:  I was 10 when we celebrated America's Bicentennial in 1976.  Mr. 10 year old figured out that he will be 74 for America's Tricentennial in 2076.  That's kind of freaky to consider my children living to see America's 300th birthday when I saw its 200th.
Posted by Unknown