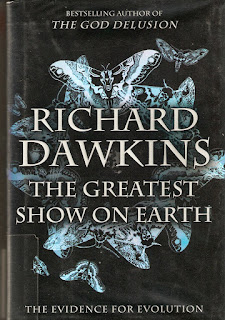 Saturday afternoon at the public library, Darling Bride tells me this book is on the New Arrivals shelf.  I'm accepting the challenge.  I will read this book, biased as a Creationist who believes the Earth was created in six literal days not too long ago (I am also a member of Mensa, so I'm no dummy).  Can Richard Dawkins, in his 2009 release The Greatest Show on Earth - The Evidence for Evolution, truthfully state a compelling argument for evolution?

I will also post about it each chapter, and we'll see.

Chapter 1:  Actually, I don't get out of the preface before he makes a statement I know is untrue:  that no reputable, serious scientists dispute the fact of evolution.  That is untrue because I know there are many who well articulate the impossibility of evolution:  Philip Johnson's Darwin on Trial, Jonathan Sarfati's Refuting Evolution and Refuting Evolution 2, Hank Hannegraaff's Fatal Flaws, Lee Strobel's Case for a Creator are just the ones I can think of off the top of my head.  So Dawkins is either denying the debate, or he is woefully uninformed about well reasoned and insightful critiques of evolution.  Then again, he may define "reputable" as anyone who agrees with him, thereby anyone who disagrees in good conscience is "dis-reputable"?

Dawkins pulls no punches with his adjectives describing those who don't believe in evolution:  "woefully uninformed",  "history-deniers", and "uneducated churchgoers" are examples.  On the other hand, liberal church clergy who believe in evolution are "thoughtful."


In Chapter 1, he begins his case by arguing that a "theory", according to the Oxford English Dictionary, can be either an unconfirmed or confirmed hypothesis.  He gives examples of the confirmed variety:

Then Richard Dawkins introduces literary sleight of hand by adding evolution to the list.

He concludes chapter 1 by promising to prove evolution to be a confirmed hypothesis, essentially a theory that is fact, just like the earth, sun, and the triangle.

As an uneducated, woefully misinformed history denier who happens to have an IQ higher than 2% of the general population, I can't wait.
Posted by Unknown