Book Review: THE RIGHT TO LEAD by John C. Maxwell 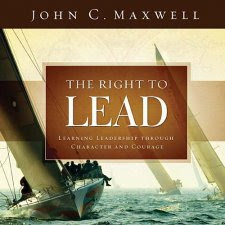 Hard work is, well, hard.  Either on the job or at home, fulfilling responsibilities, including influencing our circles of influence, such as co-workers, spouse, children, neighbors, excellence is a battle.  One of the tools to fight the battle is John C. Maxwell's latest book, The Right to Lead.  It is in gift book form, meaning that it has lots of pictures, attractive binding, and not a lot of detail.

It has short stories about military leaders such as Schwartzkopf and Washington, other heroes such as Nelson Mandella, Harriet Tubman and Eric Liddel, and other people who would be anonymous except that they led well in a particular area.  Complementing the stories are quotes from Vince Lombardi, Bible Characters, poetry, and others.  Maxwell quotes himself occasionally, which struck me as a bit odd and I could have done without that.

Otherwise, I like it because while fighting the good fight and working hard, I can glance through the book and get a quick pick me up through one of the stories or quotes.  This isn't intended to be a detailed work on leadership, Maxwell and others do that well elsewhere, but sometimes a quick reminder, available in this book, is what I need to go onto the next challenge that God throws my way.

Then again, since it is a "gift book," I think I will give it to my son.

P.S. I received this book free from http://www.booksneeze.com/ in exchange for writing an honest (doesn't have to be a positive) review.
Posted by Unknown